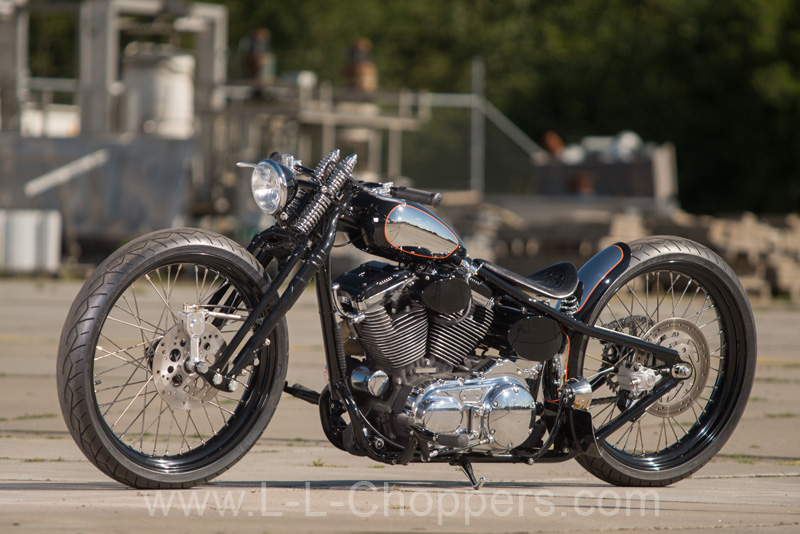 L & L Choppers built this modern version of a boardtracker for Rob, which is not exactly a rookie in the motor world. After a series of sports bikes Rob decided that is was enough with the fast bikes. Therefore, he decided to switch to a Yamaha Wild Star, which was rebuilt in the style of Big German Thunderbike. But Rob was not satisfied about the handling of such a thick rear wheel and also that much chrome really was not for him. “I wanted to go back to basics. Back to the leaking, crackling oldtimers! One particular type then moved his heart: the boardtracker!” Rob came up with a modern version of the boardtracker where the main features – two large wheels, a powerful block and a bare frame – formed the basic ingredients. With these drawings under his arm Rob knocked at L & L Choppers.

Rob: „For the source of power I chose a Sportster block because they are compact and strong.” The L & L frame is equipped with a single down tube and the seat falls nicely in a nod so that the line flows incredibly beautiful. To bring the bike to a higher level Sjaak figured it would be better to assemble a set of 23”. In terms of aesthetics the design wasn’t 100% stuck to the board tracker look. Also of the use of an pre-war angular tank design was deviated by egg-shaped chopper tank. This chopper look was even carried further by lowering the jumper fork. Rob wanted the finest vintage levers that were currently available and these were supplied by the Italian firm Kustom Tech. The oval oil tank is repeated in the form of the air filter, which is identical to the symmetrically placed ignition coil cover. L & L artist Paul conceived the organically shaped mounting block and the exhaust is hand-made in Opmeer. Rob: “The steering is racey, but to realize a relatively comfortable sitting not too low. I actually wanted mid controls, but the practice has shown that I would drive with the knees in the neck so it was decided to choose forward controls.”

The sober paint-job with chrome surfaces is an idea of ​​Rob. „If you’re at a show and see a row of motorcycles, then mine should not stand out in terms of the color scheme. It’s more fun when people walk past … and then take one step back! The paint-job had to be simple and classic. The idea is derived from the mopeds of the past, which was black alternated with chrome. A nice effect is that the little peanut tank appears to be even smaller by the flat formation.”